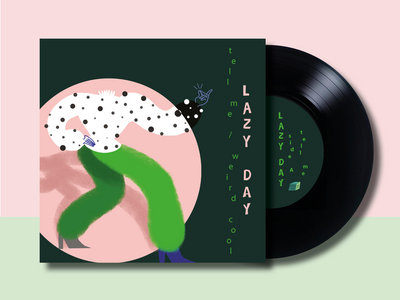 This was exclusively pressed for Flying Vinyl and their monthly subscription service, but they gave us a few to sell on to you cool people. Putting this 7" together was a really lovely way for us to put a spotlight on two of our songs, and allow us to package them in a new and different way. 'Tell Me' and 'Weird Cool' were written at different times about two completely different things, but go together strangely well. This came out right after our Letters EP, and so the artwork for this 7" is a variation on that theme. Similar but distinct. Black vinyl, play at 45 rpm. Enjoy! x

Both songs written by Tilly Scantlebury, arranged with Beni Evans, Liam Hoflay and Kris Lavin.
‘Tell Me’ produced by Steph Marziano at Czar Street Studios. Drums performed by Beni, all
other instrumentation and vocals performed by Tilly. ‘Weird Cool‘ recorded by Olly Betts at The Crows’ Nest Studios. Drums by Beni, lead guitar by Liam, all other instrumentation and vocals by Tilly. Both songs mixed by Adrian Hall at Clever Pup Studios and mastered by Andy ‘Hippy’ Baldwin at Metropolis. Artwork by Eleanor Crewes. ‘Tell Me’ originally released by Weird Cool Records on the ‘Letters’ EP (2019) and ‘Weird Cool’ originally released by Art is Hard Records (2018). (c) (p) M. R. Scantlebury. Exclusively pressed for Flying Vinyl.

ships out within 7 days